We The People Fell Asleep...

Truth is akin to Cool as both are Repulsive to the Un. But, when Ignorance is—Ignored; Stupidity is— Justified! "We the People of the United States, in Order to form a more perfect Union, establish Justice, insure domestic Tranquility, provide for the common defense, promote the general Welfare, and secure the Blessings of Liberty to ourselves and our Posterity, do ordain and establish this Constitution for the United States of America."

It is Time to Change the Dirty Diaper!

Believe It or Not, America is Not a Democracy, Nor a Republic Anymore; as We Have Degenerated— Into a Corporatocracy. In Fact, Current Events are Dictated and Manipulated Daily —World-wide; by a Multi-International Conglomerate of Fascist Interconnected Corporations. Unfortunately, it has Been Going on for Far Too Many Years? Why? GREED— International Policy,   “Organized Irresponsibility”, a 'New Socialistic World Order'…

Wow? Getting ready to introduce Sharia Law in our U.S. Government? Nancy Needs a burqa and Chuckie needs to grow a beard. Bernie Sanders Wants Socialism? Wake UP America…. https://www.foxnews.com/politics/trump-retweets-image-of-pelosi-schumer-in-muslim-garb-by-iranian-flag 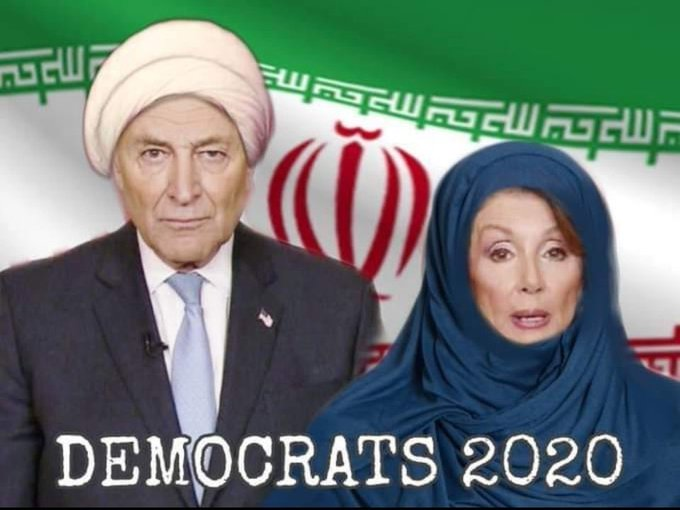 Ultimately, a Fascist Government Takes Control  of ALL Main-Stream-Media, Spies on You and Seizes All You Firearms. Wake Up AMERICA! We were Hoodwinked. Our FREEDOMs have been Seized by 'Corporate Fascism'.

To Learn all about The New World Order Click Here!

Alas, Corporate Welfare, Privatization, Deregulation, Accumulation and of Course—Monopolies. Thus, they Continue to Destroy Our Environment as They “Leech Off Society”. They Willfully  Rob, Rape, Pollute and Destroy Much of Mother Earth’s Natural Resources. And, they Bully and Murder— ‘We the People of Earth'; Including Our Drinking Water, Plants and Animals, All—  in the Name of Greed, Power and Austerity, as They Plot with Sinister Rational and Employ FEAR by Design. They Freak Us Out by the Threat of Terrorism. But Who or What— Controls the Terrorists?

Originally, America Was Set Up To Be A Republic…

It is Time to Reflect. How and Why Did This Happen? It Happened Because ‘We The People'; Let It Happen. Truth Be Told, Our U.S. Government is in Moral Decay, as The Banksters are Destroying Our Livelihood. And, If We Don’t Wake Up Soon and Address This Fact; ‘We The People’, Shall Face An Ultimate National Disaster…

‘Third Eye Blind’? WAKE Up! It is Time for Some Contagious Moral Courage. Strategically, It is Time to Proceed and Hold the ‘Powers that Be'; Accountable for Their Actions.

In the Name of Truth, Honesty, Dignity and Integrity; We Must— Be Aware of the Subtleties of Power. Thomas Jefferson Warned: “An enlightened citizenry is indispensable for the proper functioning of a republic.” Alas, The Public Must Be INFORMED! The old adage of the “golden” Rule, still applies: “He who has the gold, makes the rules”.  There is a Very Fine Line Between National Security and Corporate Security.

“Education is the most powerful weapon which you can use to change the world.” — Nelson Mandela

Sometimes, You Have to Dig Deep; in Order to Expose Truth. BE AWARE: Truth is akin to Cool as Both are Repulsive to the Un. But, when Ignorance is Ignored; Stupidity is Justified! Alas, ‘Power Corrupts, Absolute Power Corrupts Absolutely.’

The Powers that Be have Strategically Manipulated the System and Our Institutions Long Enough. It is Time to Get Our Government Back on Track as Well as our Educational System and Our Main Stream-Media. They Lack a Moral Compass? What Ever Happened to Journalistic Integrity?

Unfortunately, the Vast Majority of Major-Main-Stream-Media is GUILTY of Censorship by Ownership. They Suppress the Truth in the Name of Ulterior Motives. Their Style of News is But, a Mockery of Freedom. Those that Participate in Their Farce, Should Be Ashamed of Themselves! They are the Laughing Stock of the World. They are Betraying 'We the People' and, They are Betraying HUMANITY. 'Evil is What Evil Does'...

"For a society to be responsible and powerful, it must be informed. Our free press, protected by the first constitutional amendment, plays a critical role in ensuring that every American has constant access to important and trustworthy news."

“Were it left to me to decide whether we should have a government without newspapers, or newspapers without a government, I should not hesitate a moment to prefer the latter. But I should mean that every man should receive those papers and be capable of reading them.” - Thomas Jefferson

"Freedom House, an independent watchdog organization, ranked the United States 30th out of 197 countries in terms of press freedom. The report lauded the constitutional protections afforded American journalists, but criticized authorities for placing undue limits on investigative reporting in the name of national security. Freedom House awards countries a score out of 100, with 0 representing most free and 100 representing least free. The score is broken down into three, separately weighted, categories: legal (out of 30), political (out of 40), and economic (out of 30) environments. The United States scored a 6, 10, and 5 respectively. This gave it a cumulative score of 21." "As of February 12, 2014, the United States is ranked 46th in the Reporters Without Borders Press Freedom Index. This is a measure of freedom available to the press, encompassing areas such as government censorship, and not indicative of the quality of journalism. There was a fall from 20th in 2010 to 42nd in 2012, which was attributed to arrests of journalists covering the Occupy movement." "For 2012, Finland and Norway tied for 1st worldwide. Canada ranked 10th, Germany tied 17th with Jamaica, and Japan tied 22nd with Suriname. The UK ranked 28th, Australia 30th, and France 38th." "Extraterritorial regions of the US ranked 57th."

God Bless and Kudos to Lionel, in regards to his remark about Journalism and the Main-Stream-Media:

“They encourage intellectual torpor and ennui. Asking too many questions especially when you question the official story will get you labeled a conspiracy nut. Asking too few questions will win you high journalistic praise as caution and control are rewarded and heralded.”

Alas, Suppression is Evil. Don’t be Fooled by Censorship by Ownership. How can Anybody Learn Truth when We are Fed Lies and Half-Truths— Propaganda; that Distort Reality? Remember, Knowledge is Power; the Lack of Knowledge is Impotence. Follow the $$$! Who Benefited? Thought is Potent! You are what you Think. THINK about That!

WAKE UP! Denial is the Anti-Christ. Shh and Hush-Hush are its best friends. They are Repugnant? Silence is Not Golden; when Truth is Denied. As a Matter of Fact, it Maintains Perpetual Agony. Speak Out! Deliver us from evil. The TRUTH will set us FREE! Destiny Awaits OUR Command! Inquire! BELIEVE that We Can Make a Difference and Together, We Will Manifest Humanity!

“Substance responds to our faith in it.” —Richard Jafolla

Far Too Many that are in Charge, have an Immoral Code of Honor. They have NO Conscience, No Shame! No Empathy or Any Sympathy? No Regard for Dignity? No Credibility! It is but, a Sociopathic Agenda. Congress is but a Dysfunctional Menace to Society…

How can we possibly Trust or Respect them? This current situation, Status Quo; is Totally Unacceptable! Speak Out, Testify! Spread the Word. God Bless the Alternative Medias.

Frankly, I am Mystified by the Stupidity of the Status Quo—State of Affairs? It’s Absurd and Appalling to say the least? Especially since, almost Everybody Knows that it is INFECTING— Their Daily Lives? But No-Body Does Anything to Try and FIX It; let alone— Address It?

“There is a need for social movements that invoke stories as a form of public memory, stories that have the potential to unsettle common sense, challenge the commonplace, and move communities to invest in their own sense of civic and collective agency…” —-Dr. Henry A. Giroux—‘The Violence of Organized Forgetting‘

Indisputably, it is Time to be Open-Minded. Imperialism is Diabolical! It is Time to Open Your Heart. United, it is Time to Lay a Foundation, as We Chart a New Path via B4HEART; and Change the Dirty Diaper. It is Time for Our College Students and All of Our Veterans, as Well as Our Current Service Men and Women; To Step Up to the Plate and Get AMERICA Back On Track NOW!

It is Time to Open Your Mind, Heart, and Spirit! It is Time to Be WILLING to Make a Difference!  Do Your Part— B4HEART…

Together, We Can Put an End To All of This Madness. It is Time for Brave Journalists and Main-Stream Media to Speak Truth and Spread the Word— B4HEART. It Is also Time for Politicians to Confess, Come Clean and SPEAK Out. Those that Speak Out; Should Be PARDONED. Those that Continue to Lie and Deny; Should Be Prosecuted, in the Name of HUMANITY! We Must ALL Come Together and Face the Facts. It is Time to BRAIN-Storm in the Name of PEACE on EARTH!

We Owe it to Our Children as They are the Future. We are Responsible for The State of Union on Mother Earth. Communication and Civil Relationships; Cooperation, are Vital  to this Cause via Trust, Respect, and Understanding. Discovery! Synchronicity! The Law of Attraction and Manifestation. BELIEVE.

"And Now Abide Faith, Hope, Love, these three, but the Greatest of these is LOVE." - I Corinthians 13:13

“The Truth Will Set US FREE!”

“All truth passes through three stages. First, it is ridiculed. Second, it is violently opposed. Third, it is accepted as being self-evident.”