American history is paved with Immaculate Deception. Glory Be when the Voice of Dissension— Speaks Loud & Clear! Ironically, far too many people laugh at ‘Science Fiction’ as being impossible, but they believe in the lies that we are taught in school as actual historical facts— which unfortunately; have been white-washed and actually filled with fictional bull-shit— EVIL; false flags, cover-ups, plausible deniability. You would be shocked, dismayed if you only knew the Truth. Check out the history of ‘American False Flag Operations’:

Was 9/11 a False Flag Operation? A well-organized plot to manipulate America into action? Was it meant to instill fear from al-Qaida and thus, justifying the invasions of Afghanistan and Iraq?

Did They Let 9 / 11 Happen on Purpose, so that certain somebodies, can make more— money again?

Let’s do another brief history.

Back in September 14, 2003 on NBC’s Meet the Press, Dick Cheney said, “And since I left Halliburton to become George Bush’s vice president, I’ve severed all my ties with the company (Halliburton), gotten rid of all my financial interest. I have no financial interest in Halliburton of any kind and haven’t had, now, for over three years.” Ironically, the ex-vice president conveniently forgot to mention (lies of omission) that he continued to receive a deferred salary of over $150,000 per year while maintaining 433,333 shares of unexercised stock options from Halliburton.

Halliburton Corporation, who’s former CEO is Ex-Vice President Dick Cheney; has so far gotten billions of dollars’ worth of US construction contracts in Iraq and elsewhere. In January 2004, it got a no-bid cronyism and favoritism contract from the US Army. Soon thereafter, it over-billed the US Government by about $27.4 million dollars for meals for our troops. It has evaded paying US Taxes, admitted and or was accused of bribes as well as doing business with foreign counties which were forbidden at the time by our US Government to do business with. Halliburton also over-billed the US Government while Dick Cheney was CEO.

The US bombed the hell out of Iraq and the US taxpayers paid Halliburton to rebuild it? Is it just a coincidence that Cheney’s closest political friend is Donald Rumsfeld? Sad but true, both men got rich off the US taxpayers.

Check out the Cheney/Halliburton Chronology:

So how did this all come about?

It is standard operating procedure (SOP) to scramble jet fighters whenever a jetliner goes off course or radio contact with it is lost. Between September 2000 and June 2001, interceptors were scrambled 67 times. In the year 2000, jets were scrambled 129 times. What happened on September 11, 2001?

Coincidently, on the day of the 9/11 attack, NORAD, the North American Aerospace Defense Command did nothing, there was no reaction from the United States Air Force as hijacked aircraft flew through US airspace and plowed into buildings. This lack of response is inconceivable unless the USAF was ordered to stand down. And apparently, it was. Ironically, according to the  Chairman of the Joint Chiefs of Staff Instruction CJCSI 3610.01A (dated 1 June 2001)  ‘the protocol was changed so that any requests for “potentially lethal support” had to come explicitly from the secretary of defense (Donald Rumsfeld), leaving commanders in the field unable to respond to hijackings in any meaningful fashion.’

In fact on the day of September 11, 2001, there were five military exercises being held and this resulted in flight controllers, commanders and pilots being unable to distinguish real world events from exercise scenarios. Vice-President Richard Cheney, AKA Dead-eye Dick was in charge of the training exercises Even after NOARD personal realized that the horrendous events were real, they were ordered to Stand Down.

Get the whole story at:

Read the stand down order:

Cover-up at the Pentagon?

Videos were seized by the FBI, from the Sheraton Hotel Sheraton National Hotel, the CITGO gas station, which was under the flight path and from traffic-monitoring cameras along adjacent highways. None of the confiscated video has been returned to the businesses or released to the media or public. Why?

Read the Cover-up Details at: http://911review.com/coverup/pentagon.html

Congressman Dennis Kucinich for instance, he is a democrat from Ohio who wants to restore the rule of law and hold former President George Bush and his administration, including former VP Dick Cheney; accountable for their alleged abuses of power and violation of national and international law. He introduced several Impeachment Articles of Resolution, including one against Cheney and a so called: ‘35 Articles of Impeachment against President George W. Bush’ as well as a single article to impeach President Bush, accusing him of deceiving Congress to convince lawmakers to authorize his invasion of Iraq.

Check it out at: http://www.bibliotecapleyades.net/sociopolitica/sociopol_bushimpeachment02.htm

Also, Congressman John Conyers has proposed extending statutes of limitations on the Bush-Cheney crimes (before they magically escape down the rabbit hole). In his 487 page report, titled ‘Reining in the Imperial Presidency: Lessons and Recommendations relating to the presidency of George W. Bush’. Congressman Conyers, who is the House Judiciary Committee Chairman; warned: “To fully preserve and protect the rule of law, the statute of limitations must be extended now.” He called for a fair opportunity for them to be actually investigated by a real prosecutor.

THERE is NO  Statute of Limitations on Murder! Bush and Cheney should be tried in an International Court for Crimes Against Humanity, Including Murder for the illegal invasions of Afghanistan and Iraq!

WAKE Up America!  You can read about this and many more National Disgraces in my New Book entitled Surprise, A Message of Hope; Second Edition.

‘Truth is akin to Cool as both are Repulsive to the Un. But when Ignorance is Ignored, Stupidity is Justified!’ – Robert James Karpie 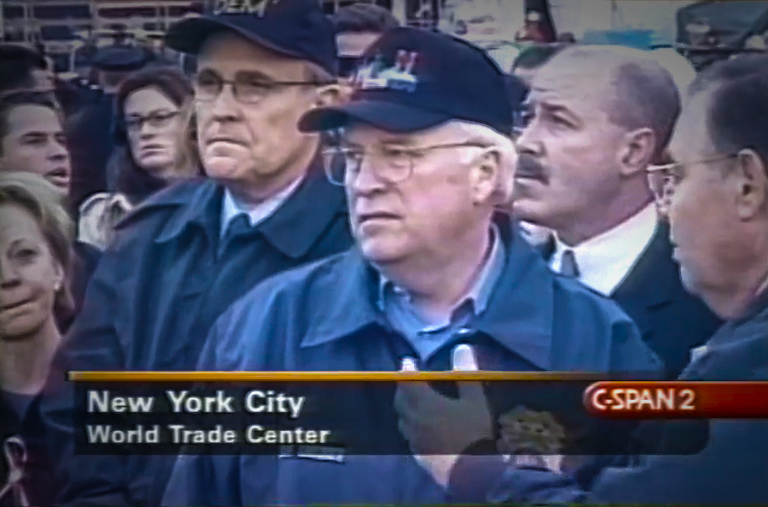 Dick Cheney and Rudy Giuliani: The First Government Officials to Dismiss the Idea of Controlled Demolition on 9/11

One of the more perplexing aspects of 9/11 is how the public was so quickly and thoroughly convinced that the airplane impacts and ensuing fires—and not the explosions that so many witnesses reported—had caused the destruction of the World Trade Center's Twin Towers.

People who have only a passing familiarity with the historical record of 9/11 might assume, understandably, that everyone has always believed, from day one, that the towers came down as a direct result of the airplane impacts.

Closer examination of the record, however, shows that officials in at least three government agencies responsible for responding to the attacks—the White House, the Federal Bureau of Investigation (FBI), and the New York City Fire Department (FDNY)—said they suspected that the buildings had been brought down with explosives. In addition, many individuals in the news media commented throughout the morning that explosives appeared to be involved.

For anyone attempting to quell suspicions that explosives were used, the simplest tactic would have been to trust that as soon as Al Qaeda was blamed for the attacks—which it was, within hours after the event—members of the media and government would conclude that Muslim terrorists would not have been able to plant explosives in the buildings without being detected; ipso facto, explosives could not have been used to bring them down.

The clearest example of someone ignoring their initial observation after learning the official narrative was structural engineer Ronald Hamburger, who worked for FEMA on the first official investigation of the collapses. Hamburger told The Wall Street Journal on September 19, 2001, “‘It appeared to me that charges had been placed in the building.’ . . . Upon learning that no bombs had been detonated, [Hamburger said,] ‘I was very surprised.’”

But in response to all those people who early on voiced their suspicion that explosives had brought down the Twin Towers—before the official narrative was promulgated—anyone needing to quell suspicions about controlled demolition would find it necessary to gently dismiss such concerns.